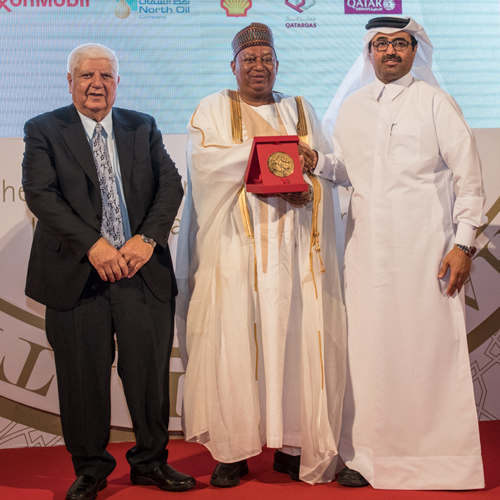 H.E. Mohammad Sanusi Barkindo of Nigeria began his tenure as
OPEC Secretary General on 1 August 2016.
An accomplished oil technocrat, H.E. possesses a wealth of
experience in the oil and gas industry, both in Nigeria and
internationally.

Born in April 1959, in Yola, Adamawa State, Nigeria, H.E.
Mohammad Barkindo holds a B.Sc degree in Political Science, a
Postgraduate Diploma in Petroleum Economics and Management,
and a Master’s degree in Business Administration.

For more than 23 years, H.E. worked at the Nigerian National
Petroleum Corporation, culminating in his appointment as Group
Managing Director and CEO in January 2009. H.E. was also
Deputy Managing Director of Nigerian Liquefied Natural Gas, as
well as Special Advisor to former Minister of Petroleum Resources
and OPEC Secretary General, Dr. Rilwanu Lukman.

A passionate advocate of the climate change initiative, H.E.
Mohammad Barkindo led Nigeria’s technical delegations at
the negotiations that produced the United Nations Framework
Convention on Climate Change (UNFCCC) and the Kyoto Protocol.
H.E. served as Chair of the Group of 77 and China at the UNFCCC
and was elected as Vice President of the Conference of the Parties
for three terms. H.E. was Chairman of the OPEC Task Force at the
15th session of the UN Commission on Sustainable Development.

As OPEC Secretary General, H.E. Mohammad Barkindo has
spearheaded several historic and market-transforming initiatives,
steering the adoption of the Algiers Accord in September 2016;
the Vienna Agreement in November 2016; and the Declaration
of Cooperation, reached with non-OPEC producers, in December
2016. This has been followed by intense collaboration with heads
of OPEC and non-OPEC countries in working towards the full
and timely implementation of the Declaration of Cooperation, to
restore sustainable stability to the oil market in the interests of
producers and consumers. As a result of these landmark actions, a
historic page has been turned and a new chapter is being written
for the energy industry, one with the interests of producers and
consumers firmly at its heart.