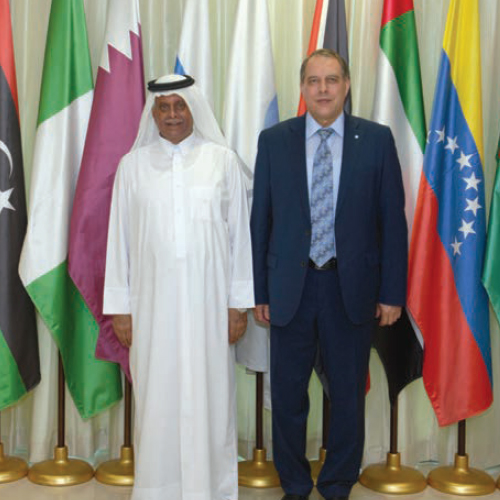 H.E. Dr. Yury Sentyurin is the third Secretary General of the Gas Exporting Countries Forum (GECF)  and was elected to this position at the 19th Ministerial Meeting in Moscow, Russia. Since assuming office, Dr. Sentyurin has recorded notable milestones and contributed greatly in transforming the GECF into a credible, fully-fledged international organization and energy coalition that plays a crucial role in the stability of natural gas markets globally.
The Forum has become a widely recognized entity and has obtained community recognition through a variety of instruments and deliverables, such as: Global Gas Model, Data Exchange Mechanism, Special Envoys for Data and Statistics Meetings, Gas Research Institute, a team of high-level experts who deliver the Global Gas Outlook 2040, the Monthly and Annual Short-Term Gas Market Reports and the Annual Statistical Bulletin.
Alongside the 2018-2019 achievements such as joining the IEA-IEF-OPEC program on the energy outlooks, participation in the Natural Gas Research Program of the Oxford Institute for Energy Studies, the acknowledgement of the Forum as an Observer International Organization to the United Nations Framework Convention on Climate Change comprehensively contributed in the Forum’s ambitions to provide updates on the natural gas and LNG industry worldwide.
Dr. Yury Sentyurin is a diplomat with accomplished studies in global economics and law. He has extensive government experience as he held various high-level positions in the Russian Government, including Deputy Minister of Education and Science, and State Secretary – Deputy Minister of Energy, as well as a Member of Russian Parliament and Deputy Chairman of the State Duma Standing Committee for Energy, Transport and Communications.