US Shale Oil & The Speed Bumps Ahead

US Shale Oil & The Speed Bumps Ahead
Description

During the past decade, US oil and gas production has risen dramatically, swinging the US’s position from energy import dependence to energy dominance. Driven by production from shale deposits that have been unlocked by technological breakthroughs in hydraulic fracturing, horizontal drilling, and advanced seismic technology, the US has increased production from five million barrels per day (bpd) in 2005, to a record high of 13 million bpd in early 2020, surpassing world leaders Russia and Saudi Arabia. However, the US became the world’s largest crude oil producer long before 2020 when production hit the 11 million bpd mark in 2018 (Figure 1).

The US Energy Information Administration (EIA) estimated that the share of shale oil in US crude oil production had reached 7.7 million bpd in 2019, equivalent to about 63% of the total US output. However, in the early months of 2020, the situation rapidly started to deteriorate when the global oil industry received a double hit from Covid-19 related demand destruction and the Saudi-Russian price war. The result on energy markets was devastating as oil prices plummeted, putting significant pressure on US shale production.

Five months later, US production had shrunk by nearly three million bpd as producers couldn’t find buyers, forcing shale companies to reduce expenses in everything from drilling rigs to workers and capital expenditures. But how hard was shale production hit? And will it be able to recover in the short term? To help answer these questions, the facts surrounding the US shale oil boom-and-bust, as well as current market constraints, must be understood.

Shale oil wells are notorious for reaching a peak followed by a sharp decline, only months after extracting their first oil. Further, the wells start to deplete much faster than conventional ones, losing significant production in approximately five years. This means that shale producers have to not only keep drilling new wells to offset the decline curve but also drill even more wells to elevate existing production levels, something producers had successfully managed to do before the coronavirus pandemic. However, with 50% of US shale oil production coming from wells drilled in the past two years, and given the current market conditions and the number of rigs continuing to slide to all-time lows, the journey to restore the previously seen record-high levels of production may take years (Figure 2). 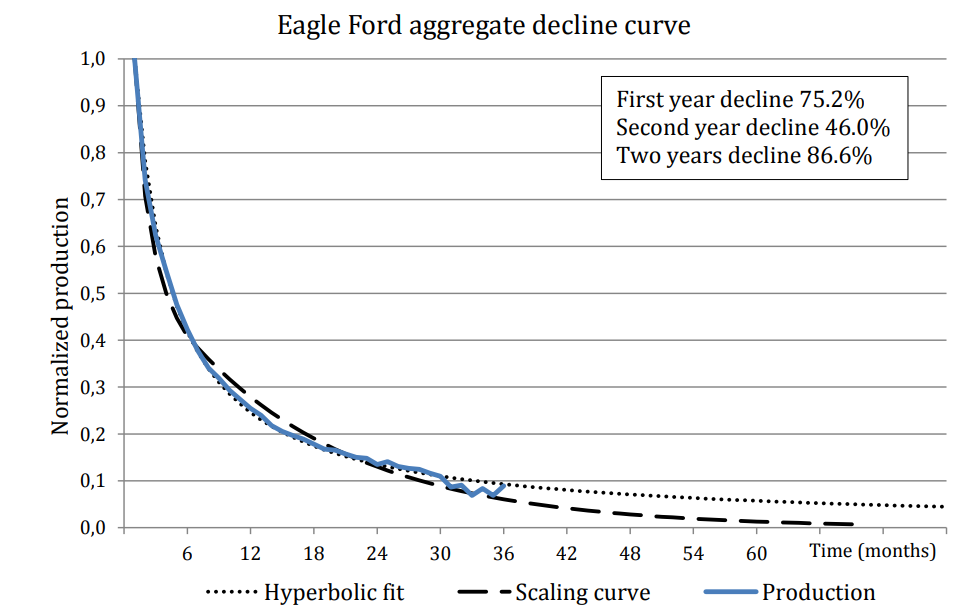 Moreover, the rapid growth of US shale production was not a low-cost endeavor. Shale operators have managed to grow, and sustain operations, using borrowed money and equity raised from banks and investors. Over the past decade, the US shale industry registered net negative free cash flows of $300 billion and saw more than 190 bankruptcies according to a recent Deloitte report. The impact of the Covid-19 pandemic has led to a curb in demand and price decline, further aggravating the financial challenges facing the US shale industry, that was already crushed under billions of dollars’ worth of debt.

As the price of WTI hovers around $40 a barrel in response to the OPEC+ agreement to cut oil production by 7.7 million bpd through December, shale producers with low-cost production, and a healthy balance sheet, are now able to resume operations. However, until prices strengthen to above $50 a barrel, the independent and more vulnerable companies with a higher cost of capital may face the risk of bankruptcy.

Shale producers have to deal with a trio of challenges: cash shortages, the cancellation of new wells, and the natural depletion of existing wells. Even with oil prices above $50 a barrel for an extended period of time, US crude oil producers would require two to three years of reinvestment in shale fields to once again reach their record production of 13 million bpd.

The road ahead will be steep, long, and filled with numerous speed bumps, but with its massive infrastructural assets, plentiful reserves, and efficient and cost-competitive operations, the shale oil industry can rise again.