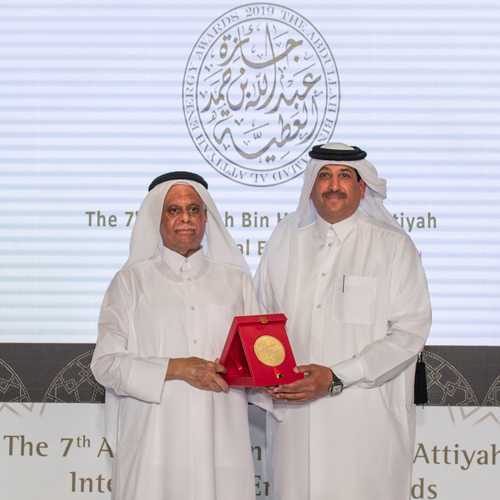 H.E. Abdulaziz Ahmed Al Malki Ambassador Extraordinary of the State of Qatar to Italy.  His Excellency Al Malki was appointed Ambassador Extraordinary and Plenipotentiary to the Quirinale - Italy, Non-Resident Ambassador to the Republic of San Marino and Permanent Representative FAO-WFP-IFAD in 2015.
Al Malki’s experience in the energy and diplomatic sectors spans more than twenty-five years. From 2002 to 2007, he was Office Director of the second Vice-President of the Prime Minister and Minister of Energy and Industry and Chairman and Managing Director of Qatar Petroleum (QP), H.E. Abdulla bin Hamad Al-Attiyah. Among his many duties while H.E. Al-Attiyah held official OPEC duties, Al Malki was instrumental in managing all the international OPEC member delegations in Vienna.
In 2011, Al Malki joined H.E. Al-Attiyah as Office Director and General Commissioner of the President of the Administrative Control and Transparency Authority in Qatar. During the COP18 2012 Conference in Doha, Al Malki held the position of General Coordinator and member of the Supreme Committee. From 2011 to 2015, he was Chairman of the Board of Directors of Qatar Fertilizer Company (QAFCO) and Member of the Board of Directors of Nibras Company for Electricity and Energy from 2011 to 2014.
Since his posting to Italy, Al Malki was General Commissioner of the Qatar Pavilion at the 2015 Milan Expo. In 2016 he became Vice President of the UN’s Food and Agriculture Organization (FAO) and is also Chairman of the Italian-Qatari Parliamentary Friendship Group.
Al Malki holds the Presidency of several committees in various sectors, public and private departments as well as member of multi administrative councils. He was Vice Chairman of Katara Company for Hotels & Maintenance from 2002 to 2014.
Al Malki holds a Bachelor of Arts in Business and Economics, from Saint Martin’s University, USA (1988) and a Masters degree in Political Science from the University of Rome La Sapienza (2016).