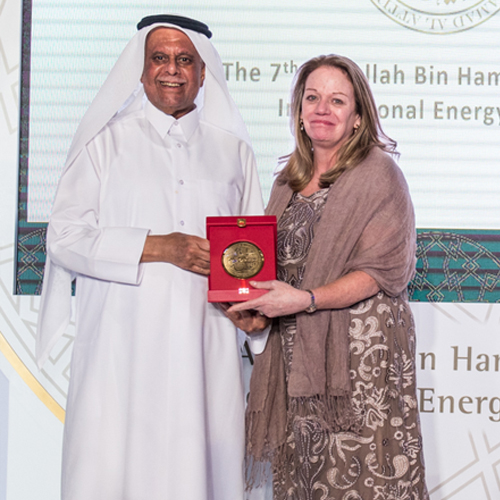 Lifetime Achievement Award for the Advancement of International Energy Journalism

Diane Munro has been editor-in-chief of Argus Media since May 2018. With a staff of a 1000 and offices in 23 countries, Argus is a leading provider of news analysis and pricing data for the global oil industry and commodities businesses.
Diane has specialized in writing about international oil markets, geopolitical issues and OPEC affairs for more than 35 years, starting her career in 1983 with Petroleum Intelligence Weekly. In 1989 she joined the Washington-based Oil Daily Co to establish their international publishing arm in London and launched two ground-breaking industry newsletters, Energy Compass and Nefte Compass. In 1994, when she was 35 years old, she was appointed President & Editor-in-Chief of the parent com-pany, Oil Daily Co., now known as Energy Intelligence Group.
Taking a break from daily deadlines, Diane spent a number of years as a freelance writer while helping friends with book projects, including an autobiography by former United Nations’ Assistant Secretary-General for Political Affairs Giandomenico Picco. “Man Without a Gun,” published in 1999, which focuses on the role of the UN in securing the release of Western hostages held in Beirut, the Iran-Iraq War cease-fire negotiations, and the Iraq Oil-for-Food program. She also spent many happy hours digging through US government archives of diplomatic dispatches as they were declassified to gather information on sensitive Middle East oil industry issues with her friend Anna Rubino, the author of the remarkable “Queen of the Oil Club: The Intrepid Wanda Jablonski and the Power of Information,” published in 2008.
Prior to joining Argus, Diane served with the Paris-based International Energy Agency, where her work centred on developing global oil market forecasts and analysing pricing dynamics.
Munro has written on energy issues for more than three decades, with her work published by Foreign Reports, Bloomberg, Middle East Economic Survey, Reuters, and Al-Hayat. Diane also serves as a Non-Resident Fellow Arab Gulf States Institute in Washington (AGSIW).